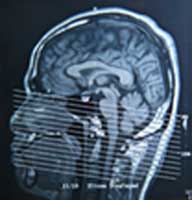 The authors, members of the neuroradiology division at the University of Pittsburgh Medical Center, used advanced neuroimaging known as “Diffusion Tensor Imaging,” (analyzing diffusivity or “ fractional anisotropy” using a voxel-based cross-subject statistical analysis.) This analysis revealed a pattern of injury  similar to what has been seen in patients with major depressive disorders and in patients with depression following moderate to severe brain injury.  This study on post-concussion brain injury patterns adds to recent evidence, discussed in prior posts in this blog, demonstrating that many persistent post-concussion symptoms  correlate with damage to the axons in particular locations in the brain.  As the authors point out, “Recent studies have shown that other postconcussive symptoms previously thought to be unrelated to a focal brain injury have correlated with a central axonal injury, including vestibulopathy, ocular dysfunction, and sleep-wake disturbances.”

As the authors note, depression is the most common neuropsychiatric sequela of mild traumatic brain injury.  The authors found that patients with mTBI who had persistent depression had significantly lower fractional anisotropy in the following regions of the brain: “the right nucleus accumbens, anterior limb of the internal capsule, and superior longitudinal fasciculus.” This finding supports the conclusion of the study that “posttraumatic depression and anxiety may be the result of discrete injuries not visible with the resolution of conventional MRI imaging.”